On December 3, the 2019 Herbie Hancock Institute of Jazz International Guitar Competition (formerly known as Thelonious Monk Jazz Competition) announced the winners; for the Russian jazz community, the most exciting was the announcement of Evgeny Pobozhiy, 30, of Russia, as first place winner of the Competition. Evgeny took home $30,000 in scholarship funding, and a recording contract with Concord Music Group.

The second prize was awarded to 27-years-old Max Light, and the third, to 25-years-old Cecil Alexander.

This is the first instance ever when a contestant from Russia wins a major jazz competition in the United States, leave alone winning the most prestigious one. Coming at the lowest point of post-Cold War U.S.-Russia relationships, this news could not be any better, confirming that music still connects peoples and individuals better than anything else can.

The competition onstage announcer, the famed singer Dee Dee Bridgewater, had obvious problems pronouncing the Russian’s name; just in case, it’s [Yev-ghEny poh-bOh-jee]. Evgeny Pobozhiy hails from Seversk, an industrial town in Siberia: 2,100 miles from the country’s capital in Moscow, but only a few miles away from Tomsk, which is an important university city and one of the region’s jazz hubs. It was Tomsk where his early jazz rock band, humbly named Project Combo, was based. In late 2000s, the then-teenage guitar prodigy Pobozhiy (as well as Project Combo bass guitarist, German Mamayev, who since then moved to a rather unlikely destination of Kampala, Uganda, in East Africa) overwhelmed critics and audiences across Russia by his incredible technique, which was outstanding not just by 18-years-old’s standards. However, Pobozhiy went much farther than just the machine-gun rapid fire that he unleashed from his guitar during the Project Combo days. He entered the famed jazz program at the Rachmaninoff State Conservatory in Rostov-on-Don, the major jazz hub in Southern Russia; but instead of a regular four-years course, he graduated in just two years, having exceeded the requirements of the course to the non-stop praise from his teachers.

In 2015, he performed in Moscow at the annual Future of Jazz festival. After Evgeny’s performance, he was approached by the festival producer, Russia’s most influential jazz musician: saxophonist Igor Butman. The country’s jazz ambassador, as Butman was often described, immediately hired Evgeny—first as an enhancement for Igor’s quartet which eventually became the Igor Butman Quintet, and then also as the regular guitar player in the Moscow Jazz Orchestra, the country’s most popular jazz big band that Butman led since 1999, which did not have a regular guitar player since the early 2000s.

With Igor Butman Moscow Jazz Orchestra and Igor Butman Quintet, Evgeny recently toured not only Russia, but also many destinations in Europe, Japan, India, China, and the U.S., maintaining a busy schedule of about a hundred performances a year. However, besides of his involvement with the country’s both most famous jazz group and jazz big band, Pobozhiy also performed at jazz festivals with his own group, where he played his original music in the contemporary fusion vein (or even prog fusion, if we could imagine such curious hybrid.) Right now he is in the process of finalizing his debut album as a bandleader. Watch Evgeny perform with his regular band during the recording of one of the tracks at the Bluez Minuz Studio in Moscow earlier this year. 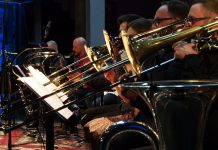